The Union Cabinet chaired by the Prime Minister, Shri Narendra Modi has given its approval for creation of National Recruitment Agency (NRA), paving the way for a transformational reform in the recruitment process for central government jobs. 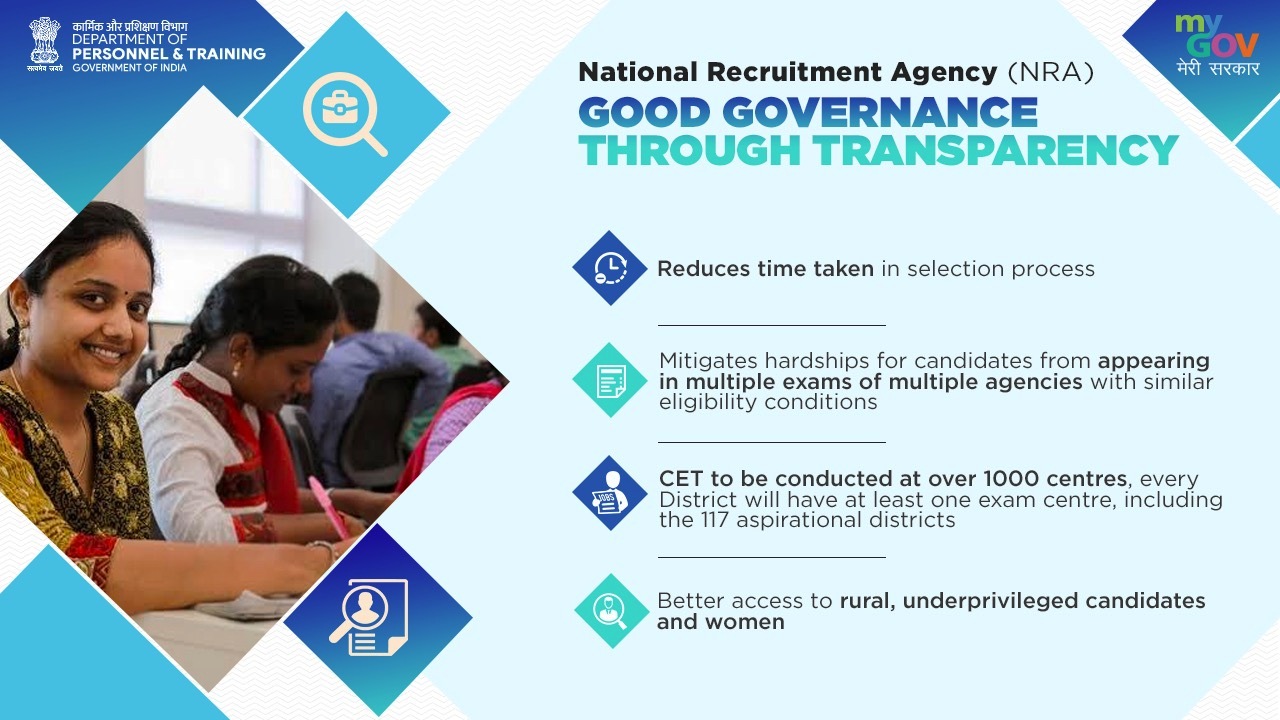 Recruitment Reform – a major boon for the youth

At present, candidates seeking government jobs have to appear for separate examinations conducted by multiple recruiting agencies for various posts, for which similar eligibility conditions have been prescribed. Candidates have to pay fee to multiple recruiting agencies and also have to travel long distances for appearing in various exams. These multiple recruitment examinations are a burden on the candidates, as also on the respective recruitment agencies, involving avoidable/repetitive expenditure, law and order/security related issues and venue related problems. On an average, 2.5 crore to 3 crore candidates appear in each of these examinations. A common eligibility Test would enable these candidates to appear once and apply to any or all of these recruitment agencies for the higher level of examination. This would indeed be a boon to all the candidates.

A multi-agency body called the National Recruitment Agency (NRA) will conduct a Common Eligibility Test (CET) to screen/shortlist candidates for the Group B and C (non-technical) posts. NRA will have representatives of Ministry of Railways, Ministry of Finance/Department of Financial Services, the SSC, RRB & IBPS. It is envisioned that the NRA would be a specialist body bringing the state-of-the-art technology and best practices to the field of Central Government recruitment. 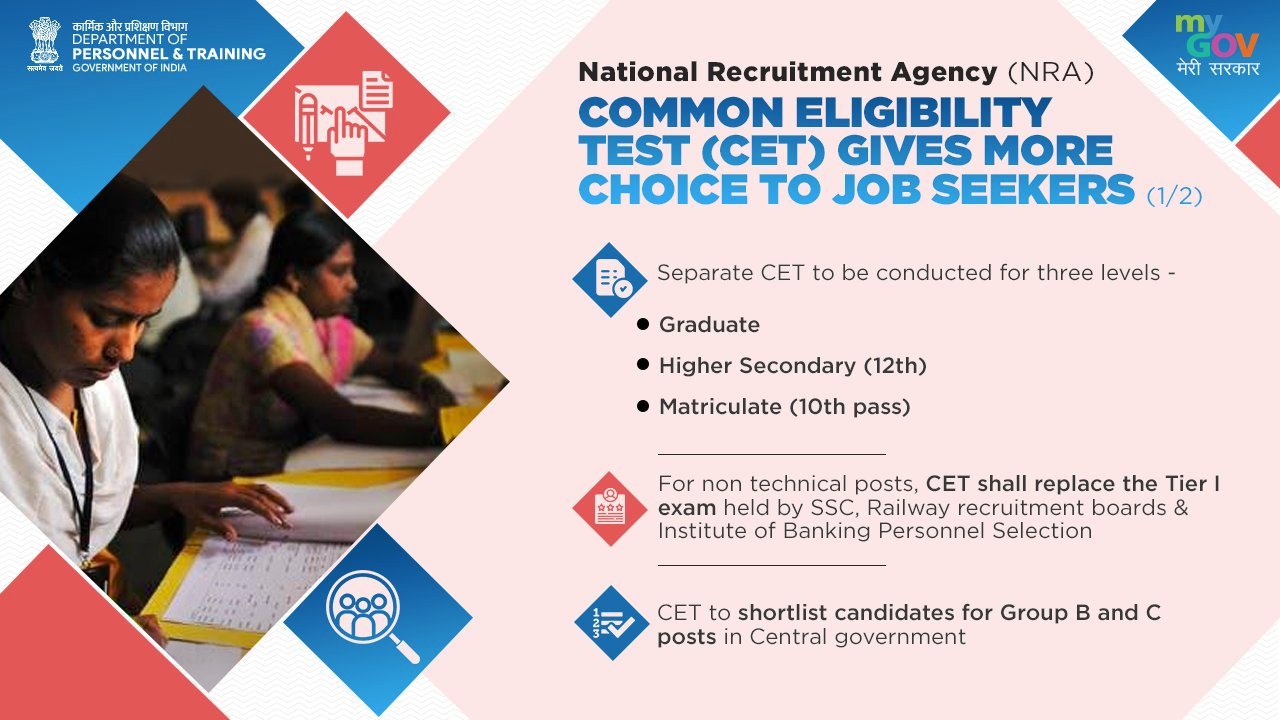 Examination Centres in every District of the country would greatly enhance access to the candidates located in far-flung areas. Special focus on creating examination infrastructure in the 117 Aspirational Districts would go a long way in affording access to candidates at a place nearer to where they reside. The benefits in terms of cost, effort, safety and much more would be immense. The proposal will not only ease access to rural candidates, it will also motivate the rural candidates residing in the far-flung areas to take the examination and thereby, enhance their representation in Central Government jobs. Taking job opportunities closer to the people is a radical step that would greatly enhance ease of living for the youth.

Women candidates especially from rural areas face constraints in appearing in multiple examinations as they have to arrange for transportation and places to stay in places that are far away. They sometimes have to find suitable persons to accompany them to these Centres that are located far away. The location of test centres in every District would greatly benefit candidates from rural areas in general and women candidates in particular.

Bonanza for Candidates from Rural Areas

Given the financial and other constraints, the candidates from rural background have to make a choice as to which examination they want to appear in. Under the NRA, the candidates by appearing in one examination will get an opportunity to compete for many posts. NRA will conduct the first-level /Tier I Examination which is the stepping stone for many other selections.

CET Score to be valid for three years, no bar on attempts

The CET score of the candidate shall be valid for a period of three years from the date of declaration of the result. The best of the valid scores shall be deemed to be the current score of the candidate. There shall be no restriction on the number of attempts to be taken by a candidate to appear in the CET subject to the upper age limit. Relaxation in the upper age limit shall be given to candidates of SC/ST/OBC and other categories as per the extant policy of the Government. This would go a long way in mitigating the hardship of candidates who spend a considerable amount of time, money and effort preparing and giving these examinations every year.

NRA shall conduct a separate CET each for the three levels of graduate, higher secondary (12th pass) and the matriculate (10th pass) candidates for those non-technical posts to which recruitment is presently carried out by the Staff Selection Commission (SSC), the Railway Recruitment Boards (RRBs) and by the Institute of Banking Personnel Selection (IBPS). Based on the screening done at the CET score level, final selection for recruitment shall be made through separate specialised Tiers (II, III etc) of examination which shall be conducted by the respective recruitment agencies. The curriculum for this test would be common as would be the standard. This would greatly ease the burden of candidates who are at present required to prepare for each of the examinations separately as per different curriculum.

Candidates would have the facility of registering on a common portal and give a choice of Centres. Based on availability, they would be allotted Centres. The ultimate aim is to reach a stage wherein candidates can schedule their own tests at Centres of their choice.

The CET would be available in a number of languages. This would greatly facilitate people from different parts of the country to take the exam and have an equal opportunity of being selected.

Initially the scores would be used by the three major recruitment agencies. However, over a period of time it is expected that other recruitment agencies in the Central Government would adopt the same. Further, it would be open for other agencies in the public as well as private domain to adopt it if they so choose. Thus, in the long run, the CET score could be shared with other recruiting agencies in the Central Government, State Governments/Union Territories, Public Sector Undertaking and Private Sector. This would help such organizations in saving costs and time spent on recruitment.

A single eligibility test would significantly reduce the recruitment cycle. Some Departments have indicated their intention to do away with any second level test and go ahead with recruitment on the basis of CET scores, Physical Tests and Medical examination. This would greatly reduce the cycle and benefit a large section of youth.

The Government has sanctioned a sum of Rs. 1517.57 crore for the National Recruitment Agency (NRA). The expenditure will be undertaken over a period of three years. Apart from setting up the NRA, costs will be incurred for setting up examination infrastructure in the 117 Aspirational Districts.